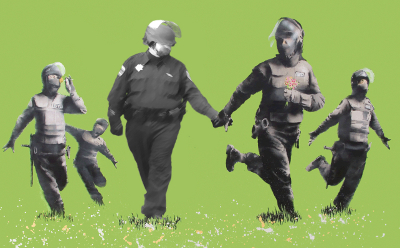 “In a report released Wednesday, a UC Davis task force said the decision to douse seated Occupy protesters with the eye-stinging chemical was ‘objectively unreasonable’ and not authorized by campus policy.”

“The pepper-spraying incident that took place on Nov. 18, 2011, should and could have been prevented,' concluded the task force created to investigate the confrontation.”

The report is very critical of both Chancellor Katehi and her administration as well as the UC Davis Police Department. Some of its findings:

So it turns out spraying chemical irritant (essentially a food product, right?) in the faces of kids peacefully sitting on the ground is not reasonable after all. You’d think a decorated and highly-paid peace officer would know that without a task force, though.

One interesting bit in the report gives insight into the logic of the authoritarian mind:

During an interview conducted by Kroll staff with Chancellor Katehi on Dec. 20, 2011, about a month after the pepper spray incident, the Chancellor explained her concerns about the involvement of ‘non-affiliates’ with the UC Davis Occupy movement and encampment. Chancellor Katehi stated, ‘We were worried at the time about that [nonaffiliates] because the issues from Oakland were in the news and the use of drugs and sex and other things, and you know here we have very young students …​ we were worried especially about having very young girls and other students with older people who come from the outside without any knowledge of their record …​ if anything happens to any student while we’re in violation of policy, it’s a very tough thing to overcome.’

To be clear, the ‘very young girls’ she is referring to are university students. Also, as the report goes on to state, there was no evidence of any ‘non-affiliates’ on campus, despite that being repeatedly used as an excuse for calling in the police. So, because Katehi didn’t want to potentially have to explain to parents that their daughters had been exposed to drugs or sex while possibly being in violation of policy, she clearly violated policy to have them roughly handled by uniformed men, pepper sprayed, and arrested instead.

Another headline from yesterday, this time from Berkeley: FBI and UCPD Settle Lawsuit with Long Haul, Slingshot, and East Bay Prisoner Support. In August of 2008 the UCBPD and FBI raided a radical community center in response to email threats to UC animal researchers that allegedly were sent from the center’s public computers. The agents refused to show a warrant, seized ALL computers (including those that were clearly unrelated to the investigation), and were generally destructive in an attempt at political intimidation.

The case was handled by both the EFF and ACLU.

As part of today’s settlement, the UCPD:

Both the UCPD and the FBI also agreed to:

The article also notes that part of the settlement will be donated “to the Occupy Oakland Anti-Repression Committee to assist others targeted by the police for their political beliefs,” which is great!