He tells it like it is (a note on Trumpist propaganda) 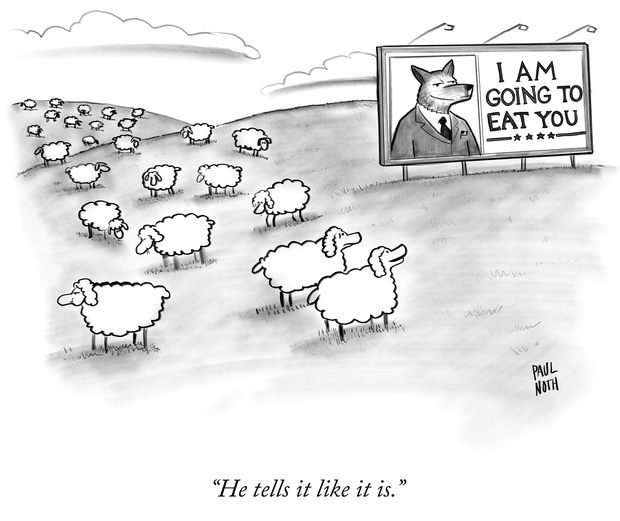 Irony once expressed: this is what it claims to be, but that is what it is; today however the world alleges that things are just so, even in the radical lie, and that such a simple finding coincides with what is good. There is no crack in the sheer cliff of the existent, to which the grasp of the ironist may cling. (from aphorism 134)

In his first days in office, Trump has signed an onslaught of executive actions which target immigrants (already ICE has arrested nearly 700 people in raids conducted according to the relaxed criteria) and refugees (he signed his infamous Muslim ban to refuse Syrian refugees on International Holocaust Remembrance Day). He’s also directed “the immediate construction of a physical wall on the southern border” (which can’t be carried out unless Congress approves the expense), the expansion of the US military, and for Federal agencies to find new ways to “support and protect Federal, State, tribal, and local law enforcement officers.”

But as an attempted reassertion of white supremacist authoritarianism, Trumpism is a version taken close to its farcical limit. It feels like an alternate timeline of 20th-century Fascism where Mussolini has a barely-functioning vocabulary and Carl Schmitt is illiterate. (Of course that doesn’t make its threats of violence any less serious.) I’ve heard Trump’s distinctive manner of speech described as an example of “post-literacy.” But the associated style of his propaganda, which simply ignores known facts and asserts more convenient ones on-the-fly without regard to their plausibility, might be better described as reflective of a ‘post-ironic’ society.

The most striking thing about Trump’s rhetoric (which is often preoccupied with accusing his opponents of being liars) is how his endless, incoherent lies are received by his followers as “telling it like it is.” By lying so transparently, Trump reveals with clarity a truth that resonates with his supporters: that politicians are liars who serve wealthy elites. At the same time, through his braggadocious and intentionally offensive language he cultivates the image of someone who can protect the cultural identity of his supporters. He so perfectly is what they claim to hate, fulfilling his own charges of political corruption and chaos, while at the same time soothing their anxieties about the changing world, that he is perceived as a prophet rather than a hypocrite.

The relation in which Trump, a lying politician par excellence, stands to his supporters, who celebrate his victory as a triumph over lying politicians, might seem ironic. But irony depends on a recognition of the difference between circumstances as they appear and circumstances as they actually are, and that differentiation is not available to Trump’s audience for whom it is lying itself that manifests the truth. Adorno, who began writing Minima Moralia in America as an exile from Nazi Germany, observed that “Among today’s cunning practitioners, the lie has long since lost its honest function, of concealing something real” (aphorism 9). That is an apt description of Trump, whose lies are revelatory to his followers precisely insofar as they lack the sophistication to actually conceal anything.[1]

Trump’s simplistic rhetoric allows for only a minimal propaganda, which has several advantages:

The disadvantage of such a minimal propaganda is that its effectiveness depends almost entirely on an active cooperation with listeners who must want to believe. It provides almost no indoctrination of its own and so requires pre-indoctrinated masses to whom appeals and dog whistles can be directed. But that again makes it easy: Trump does not need to formulate and disseminate ideas of resentment, he only needs to discover those ideas already existing in the population.

In his book on the rise of Hitler, Konrad Heiden explained that those who were confounded by the effectiveness of Hitler’s propaganda when it contained so many obvious self-contradictions were people “who do not understand propaganda, who regard propaganda as the art of instilling an opinion in the masses. Actually it is the art of receiving an opinion from the masses.”[2] That captures very well the essence of Trump’s method, which depends so much on receiving opinions rather than imposing them that it may already be hindering his administration. During the controversy over the Muslim-targeted travel ban, the White House attempted to control the discourse by imposing the idea that it was a travel “restriction” rather than a “ban.” But after a single question from the press about Trump’s own choice of words, Press Secretary Spicer had to immediately give up the effort and explain that Trump is merely “using the words that the media is using” (though it might be more accurate to say he is using the words that he knows his xenophobic supporters want him to be using).

It’s impossible to judge how many people are true-believing members of Trump’s narcissistic cult of personality. I suspect very few, but they are evidently enough to have become the kernel of a populist movement around which anyone with a nationalist, traditionalist, or monopolist agenda has coalesced. The number of Americans willing to go along with him remains alarmingly large. Even after his first two bumbling weeks in office, polls put his approval rating among the electorate at 40%-54%.

1. It will be interesting to learn the outcome of the investigation into Trump’s relationship with the Russian government. If it turns out he has been personally bribed or blackmailed or otherwise conducted secret business with Russia, it will show that Trump is capable of honest lies as well as his typical dishonest variety.
2. Konrad Heiden, Der Fuehrer: Hitler’s rise to power, trans. Ralph Manheim, Boston: Houghton Mifflin Company, 1944, 139