Joe Hill, the Preacher, and the Slave

On November 19, 1915 (exactly one hundred years ago as I write this), a Utah State Prison deputy prepared his squad of riflemen, concealed in the prison’s blacksmith shed and taking aim through slits in the wall, to carry out the execution of a 36-year-old prisoner convicted of murder.

“Fire!” The deputy was preempted by the blindfolded man bound to a chair at the other end of the rifles.

The last words of a condemned man are sometimes afforded respect even when the man himself is deemed unworthy of life. Indeed, that day the firing squad obliged the request. Five bullets punctured Joe Hill's chest and pulverized his heart.

After immigrating to America from Sweden in his early 20’s, Hill joined the Industrial Workers of the World (the IWW, a radical union whose members are known as Wobblies for some reason which no one remembers). He bummed around the country both looking for work and singing about a world without bosses.

One day in January 1914, while living in a Swedish community near Salt Lake City, Hill was shot in the chest. He told the doctor who treated him that he was involved in a quarrel with another man over a girl. He would never say anything else about it. Earlier that same day a Salt Lake City grocer and his teenage son were murdered in their store by two gunmen. The son had returned fire and possibly hit one of the attackers before being killed. Because of the timing and his unwillingness to explain the hole through his chest, Hill became the prime suspect. Even after he was charged, then convicted (though the state presented no physical evidence, no motive, and never named the second shooter), then sentenced to death, he refused to say who shot him or why.

The theory among those who believe Hill was innocent is that he was shot by his friend Otto Appelquist who was, or had recently been, engaged to Hilda Erickson — who, by some accounts, was their mutual love interest. In 2011 one of Hill’s biographers discovered a letter written by Erickson decades after Hill’s execution (1949) in which she confirms that theory (“Otto shot him in a fit of anger”). By remaining silent he seized his chance to both protect his friends from state harassment and to become the martyr he thought the anti-capitalist working class needed. 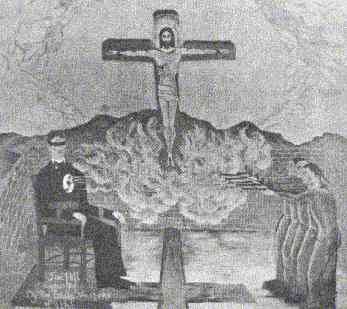 A twelve by fifteen foot mural, which was located at the Catholic Worker Movement’s Joe Hill House in Salt Lake City, depicting Joe Hill and Jesus of Nazareth being executed together

Before he was shot, and then shot again, and before Billy Bragg drank a pinch of his cremated ashes in a glass of imported beer, Hill spent his spare time as a painter, musician, poet, and composer. Despite not learning English until he was an adult in America, he became well-known among Wobblies for his lyrics and witty rhymes. Many of his songs are preserved in the IWW’s “Little Red Song Book”. His first to be published is my favorite, a parody of the popular hymn “In the Sweet By-and-By” called “The Preacher and the Slave” (the full lyrics and chords are listed in the Wikipedia entry).

The first four verses put the lie to Christian “preachers,” “holy rollers,” and “the Starvation Army,” who pacify workers with promises of “pie in the sky when you die”.

But then in the last verse and modified chorus we meet Joe Hill the dialectician:

He negates his negation of a future “sweet by-and-by” and, like in Jesus’s famous prayer, resets it from heaven to earth. The first line of Hill’s last verse also happens to be the last line of the Manifesto of the Communist Party. It is tempting to read his anti-capitalist Marxian dialectics as an application of Christian theology.

To Marx, the history of all societies so far is the history of class struggles. Specifically, Marx wrote about how workers and capitalists are both slaves to the machinations of capitalism. Employees spend their working lives literally creating the means for their own exploitation, while an employer who does not constantly reinvest and keep up with technology and who does not exploit his workers as extensively and intensively as he can get away with will soon be out of business, because he can be sure that his competitors will. Capitalists and workers depend on each other, hate each other, and produce each other. It is an apparently unbreakable cycle which must be broken.

Like the Christian conception of humanity which is unable to save itself, but through which a savior is produced, the hope for transcendence can be found to be immanent in the damned system itself. To Marx, this immanent hope is the potential for rebellion among the working class, a potential which is produced by capitalism as it gives workers less to lose and more to gain by transcending capitalist relations.

To Jesus, it is easier for a camel to go through the eye of a needle than for someone who is rich to enter the kingdom of God. It is impossible, in other words, for rich people and the kingdom Jesus spoke about to exist at the same time. But there is hope even for the rich, because “For mortals it is impossible, but for God all things are possible.”

In the terms of capitalist relations with which Marx wrote and Joe Hill sang, that miracle is realized when the working folks have gained the world, when the meek have inherited the world, when there is no more exploitation because the exploiters (“grafters”) have lost their slaves and learned to bake for themselves. Any pie consumed in such a world is then truly eaten in that sweet by-and-by: not by spirits in the sky but by those living on an earth without masters (and so with no one who needs to worry about the relative size of camels and needle eyes).

A web search will turn up many resources about Joe Hill and the mysteries which surround his life and death. In writing this I relied upon the information written and collected by The Salt Lake Tribune in their online exhibit “The Legacy of Joe Hill”. It contains a much more complete telling of his life, death, art, and legacy.

There is also a recent biography of Joe Hill which has received good reviews (I have not read it): Adler, William M. The Man who Never Died: The Life, Times, and Legacy of Joe Hill, American Labor Icon. Bloomsbury Publishing USA, 2011.

Mischeif Brew’s “The Preacher and the Slave”

My favorite rendition of “The Preacher and the Slave” is this one by Erik Petersen and his folk punk band Mischief Brew: