On the Gilets Jaunes riots

“Be realistic, demand the impossible.”

In an interview he gave to CNN last September, French president Emmanuel Macron was confident that his proposed neoliberal reforms would weather any protest “Because I was very clear during my campaign about the reforms. I explain these reforms. I presented this reform during weeks and weeks and I was elected under the reforms. I do believe in democracy. And democracy is not in the street.”

The fact that he only won in a runoff election against a Fascist-adjacent candidate in one of the least popular elections in recent French history doesn’t seem to have worried the young investment banker.

Now, after four weeks of riotous street protests across France, he has recanted, not only withdrawing some of the least popular tax reforms but also promising an increase of the minimum wage. Gilets Jaunes protesters continue to call for his resignation.

“Democracy is not in the street.”

The Gilets Jaunes protests, in case you’ve not read about them yet, are so called because of the yellow safety vests (gilets jaunes) French motorists are required to keep in their cars and which have been adopted as a symbol and uniform by many of the protest participants. The unrest initially coalesced against a small but regressive ‘ecotax’ on diesel fuel meant to curtail carbon emissions and combat climate change.

While the populist (grassroots, leaderless, containing heterogeneous political impulses from the far-right to the far-left) nature of the movement has lead to divergent interpretations, Joshua Clover has concisely described it as “a textbook riot.” Not simply because of the smashing and the looting, or the flipping of cars and setting them on fire. But as a working-class struggle against the rising cost of living which quite consciously targets the economic circulation pressure points: roundabouts and tollbooths.

The imagination of some liberals and social democrats is so limited by the republican capitalist order within which they dwell that they can’t get over the anti-tax demands of the protesters (who have already long moved past them) or understand what would motivate such protest. For these liberals, capitalism is the extent of their imagined world and taxes make it bearable — progressive taxes through which social democratic programs have been made possible are conflated in their minds with taxes in general. But fortunately the French people recognized the fuel tax for what it was: yet one more austerity measure by which the owning classes, who trash the planet in pursuit of profit, could shift the blame and the repair bill to the working class. “In overturning cars the yellow vests are symbolically overturning the entire Cartesian premise of France. This is not merely against the authoritarian Macron but a revolt against the centuries old republican order.”

And of course riots are difficult for many people to accept; mistaking the status quo as ‘peace’ and insurrection as somehow more violent than the system it revolts against is a natural habit to fall into and can be difficult to escape outside of an apocalyptic experience. So they continue to strain at the gnat of street violence while swallowing the camel of structural violence.

But there has also been hand wringing on the left, especially in the first couple weeks, because of the far-right elements participating in the demonstrations. To be sure, nationalists and fascists thrive on these moments of anger, déclassement, and popular resentment toward global elites. The gilets jaunes also seem to be getting the approval from Trumpists and other English-speaking right-wing populists. Anecdotally, I posted a tweet (complete with multiple typos) sympathetic to the gilets jaunes, and of the 60+ likes it has garnered almost all of them are by conservative nationalist or openly fascist users. Adam Gopnik, in The New Yorker's coverage of the Yellow Vests, wrote this warning that many leftists seem to agree with:

given how well organized and how alarmingly popular the far right has been in recent decades, it is surely the most likely to benefit from a social rupture: in a contest between the far right and far left that might come in Macron’s wake, anyone would bet on the Le Pens. For that reason, the gilets jaunes seem more likely to become the French face of Trumpism—or of Orbanism, or even of Putinism—than of a more tolerant future

One of the first good leftist critiques I came across was “Yellows Vests for Those Who See Red” (translated by Ediciones inéditos from the original Agitations text) which pointed out that any protest movement that includes cops, fascists, and employers could not be very threatening to the ruling classes. It went on to denounce the tax protests as “far from being a class struggle” and criticize the movement for not attacking production sites (I guess the transportation system, which almost all industry ultimately depends on, doesn’t count?)

A similar but expanded analysis of the inter-class nature of the movement can be found in this article published by the International Communist Current which claims that “The right and extreme right clearly recognise in the ‘gilets jaunes’ a movement which in no way puts the capitalist system in any danger.”

Acte IV of the protests took place last Saturday, December 8. The Reuters headline the night before read “Paris in lockdown as France braces for new anti-Macron riots” and notes that nearly 90,000 riot police had been deployed around France to quell riots, including 8,000 in Paris alone. The mood evoked by the tension reminded me of the Mischief Brew song about finding an old newspaper clipping reporting on the preparations to squash a May Day strike in the morning:

— Paris Warlike on May Day Eve by Mischief Brew

During Acte IV the police, stretched to their limit, made 400 peremptory arrests before the demonstrations began, then more than 1,000 as they clashed with protesters. Quite a response for a movement “which poses no threat to the capitalist system.”

So the above criticisms, I think, have proved to be shortsighted (though things are still changing quickly). It is something of a trope that leftist organizations spend all their time preparing for proletariat revolt, and then are caught completely off-guard and disgusted by its impurity when it finally happens. It would be a shame to abandon the movement to the right-wing influences, but fortunately even early on many working-class French leftists actually participating in the events weren’t so pessimistic about the movement’s prospects. I found this quote in an article published by an anarchist group after Acte III of the protests (December 1):

The movement of yellow vests is a real popular revolt, with an obvious class dimension, but whose political colouring depends on local contexts. The worst is next to the best. That the fascist and nationalist leprosy infects several points of the mobilization and flowers in the words of some of the yellow vests is not surprising given the current political context. But to believe that the far right could monopolize a popular struggle of magnitude is an incredible admission of weakness.

As I am writing this it is early Saturday morning in Paris. Whether a significant Acte V will materialize is yet to be seen. Things are changing quickly; it is difficult for people on the ground in Paris to keep up, much more so a non-Francophone thousands of miles away. I’ve not had time to read much, and new commentaries and translations keep appearing. Here are my favorite of the ones I’ve read so far.

If you only read one, read this one. “In this article, Joshua Clover argues that the gilets jaunes are in fact a texbook example of a contemporary riot, and may be best seen as an early example of an approaching wave of climate riots.”

He also has another good short take: “Five Notes on the Yellow Vest Movement,” Popula (19 December 2018).

Paris/Maidan: Two Letters on the Uprising in France, The New Inquiry (7 December 2018).

The first letter from France is an astute summary of the situation:

The second letter recalls some lessons from the Ukranian Euromaidan uprising, urging anarchists and the left to not “curse everything and return to their homes, mumbling something about the unconscious masses” just because they spot a few fascists in the crowd.

Uses Brazil’s 2013 uprising as an example of how the labour union’s fears of the far-right danger becomes a self-fulfilling prophecy.

Translated from the original published on December 9th.

Anarchists, especially, are put in an awkward position by these sorts of populist uprisings which involve far-right elements. About the best we can do is mumble something about a three-way fight and hope the fascists don’t come out the better (very similar to the 2013 transit fare protests in Brazil or the Euromaidan demonstrations in Ukraine).

CrimethInc has done an admirable job of this with their analysis of the early protests:

What should anarchists do in a situation like this? We can’t side with the state against demonstrators who are already struggling to survive. Likewise, we can’t side with demonstrators against the natural environment. We have to establish an anti-nationalist position within anti-government protests and an anti-state position within ecological movements. The “yellow vest” movement provides an instructive opportunity for us to think about how to strategize in an era of three-sided conflicts that pit us against both nationalists and centrists.

From our perspective, there’s no doubt that their anger is legitimate. Most people who take part in this movement speak of the difficult living situations they have to deal with every day. It makes sense that they are saying that they have had enough; the gas issue is just the straw that broke the camel’s back. […​]

So anger—and direct action—are legitimate. The question is whether the political vision and values that are driving this movement can lead to anything good.

The CrimethInc piece describes the gilets jaunes as inspiring, criticizes it for starting off from a non-radical position (“we should be asking why we are so dependent on cars and gasoline in the first place”), but comes to no fast conclusion as to whether the movement will lead to anything good.

They are continuing to publish commentary and reports: https://crimethinc.com/tags/yellow-vest

Will Wiles, “The Slippery Politics of the Gilets Jaunes’ Hi-Vis Jackets,” Frieze (12 December 2018).

On some of the symbolism of hi-vis workwear.

A Twitter thread with photos of good graffiti from the protests 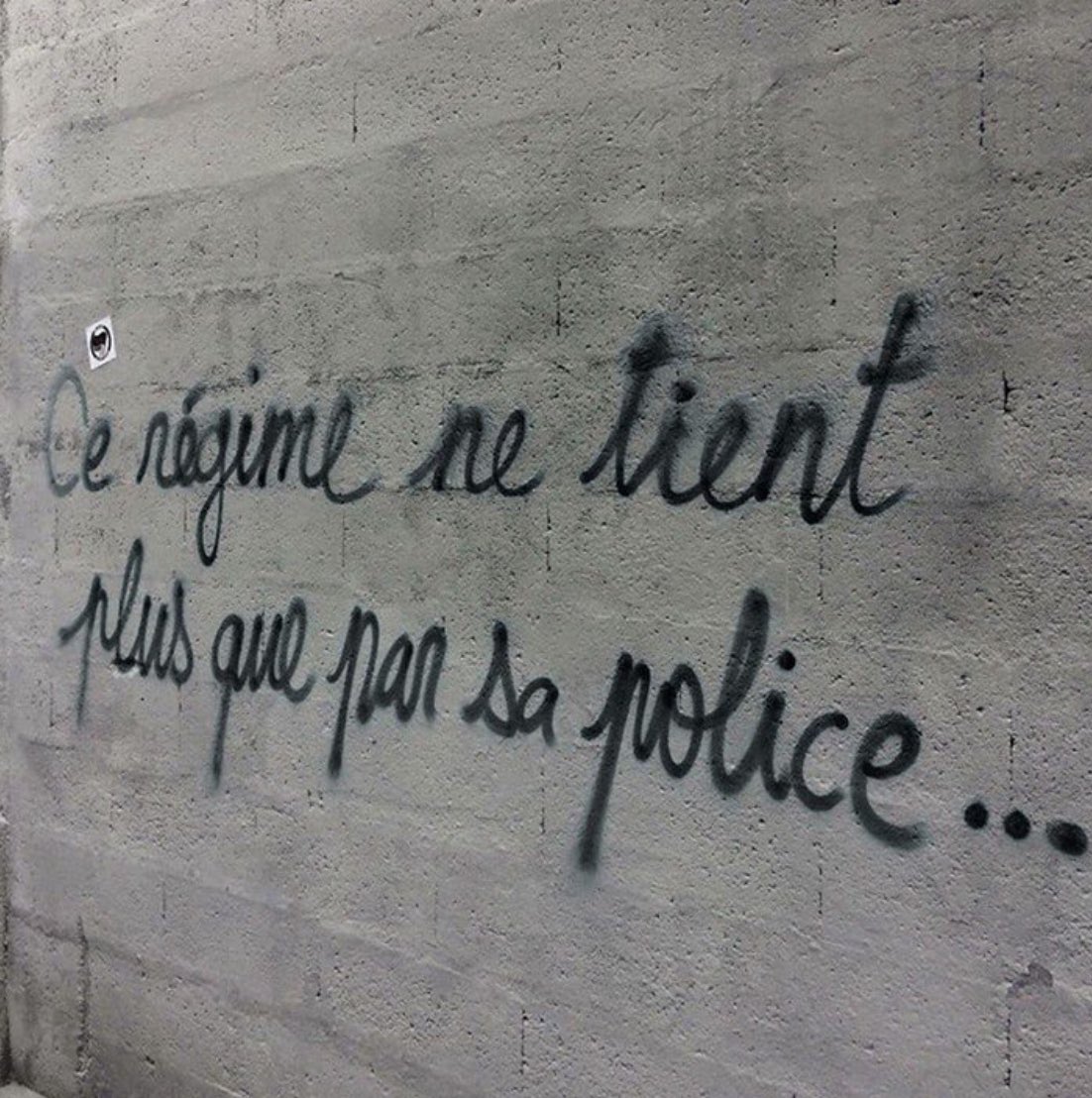 Figure 1. The regime is only held together by the police.